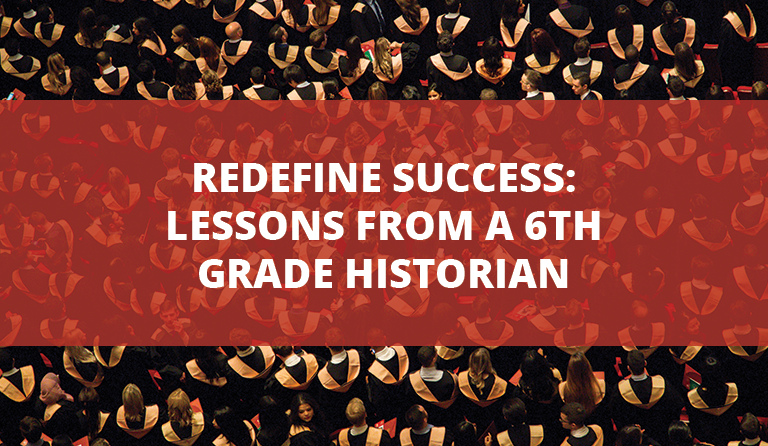 When my son was in sixth grade he came home very excited one day. “Dad, I’m going to run for student-body historian!” “That’s great son…historian?” I wondered aloud, “why not run for president or vice-president like most kids?” He explained that while four student council positions exist, most kids were drawn to the president, VP or secretary positions—but only a couple of kids had registered to run for historian. When I asked what the historian did he told me that the responsibilities and opportunities for all positions were the same. He identified the path that was most likely to lead to success as he had defined it: being involved in student leadership.

After an intense process that included the creation of two brilliant campaign posters and one invigorating speech, my son was elected historian by a wide margin! He loved his final year of elementary school as a member of the student council. It was a brilliant strategy conceived by a sixth grader: look at the end-goal and plot the course with the best chance to succeed.

When I was in junior high and high school, I paid attention to those charts hanging in the counseling office at school. To my adolescent self the message was clear: more education = more earning ability. With some help, I converted that message to college degree = more money in my pocket. Period. The truth of the matter is more education and training do lead to more opportunity and earning potential, but it’s not always through the “college for all” approach.

The mantra of “college for all,” is a little bit like encouraging every child to run for student-body president. One of the unintended consequences of that message results in too many students leaving years of post-secondary schooling with a mountain of debt and no career path readily available. Meanwhile, the skills gap continues to grow and great paying jobs go unfilled.

Kevin Fleming, has done fantastic work toward better preparing students for the economy of the future, writes about the ratio of jobs in our economy in Success in the New Economy he said, “The true ratio of jobs in our economy is 1:2:7. For every occupation that requires a master’s degree or more, two professional jobs require a university degree, and there are over half a dozen jobs requiring a 1-year certificate or 2-year degree; and each of these technicians are in very high-skilled areas that are in great demand. This ratio is a fundamental to all industries. It was the same in 1950, the same in 1990, and will be the same in 2030.”

If seven out of ten jobs in our economy are not going to require four-year college degrees, the message of “college for all” should be modified. Students who earn certification in areas of career and technical education should be recognized and encouraged in ways that are similar to those students who are accepted into the college of their choice. College isn’t a necessary path to many of the great careers that are available. We should encourage students to identify the opportunity that will lead them to their goals. There are too many opportunities and too many great jobs going unfilled because we look at them the same way sixth graders look at the position of student body historian.